In 1695 the relics of St. Chrysanthus were brought from Rome to Bad Birnbach by Baron von Schmid. 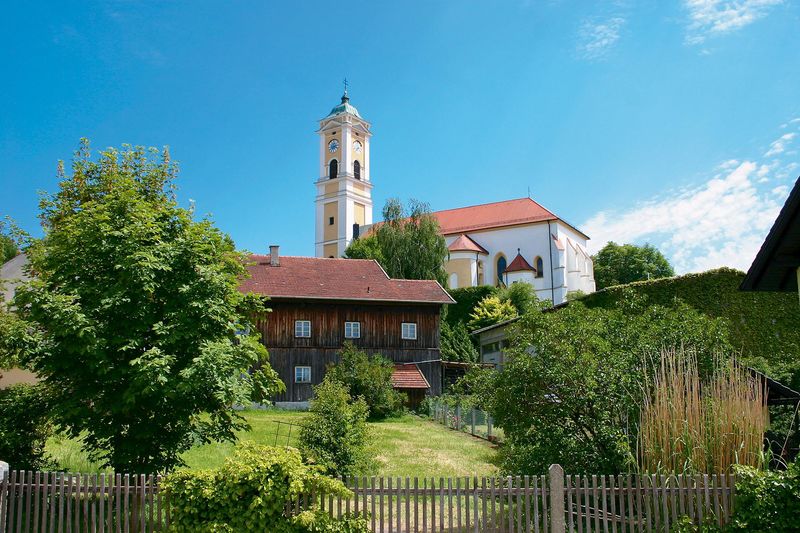 History: A church in Birnbach was first mentioned in the 9th century. In a document of the time from 818 - 838 there is a report of "Una basilica ad Perinpah". Through this church, which was certainly built just from wood at first, Birnbach became the centre of a parish of the same name. However, it can be proven that this was only confirmed in a document around 1200. Around 1160 the Birnbach church was called his church by the cathedral dean Rubertus of Passau. He was also the official pastor of Birnbach and the church in Birnbach belonged to the cathedral chapter of Passau. This becomes understandable when one considers the first documentary mention of Birnbach, which says that on 24 June 812 Ruman and Gebhard, two noblemen, handed over their property in Birnbach to the Passau bishop's church. In 1241 the first known priest of Birnbach is listed; it was Magister Chuno, notary of the palatine count Rapoto of Ortenburg. From that time the priests of Birnbach are almost all known by name. Today's late Gothic Assumption of Mary parish church was built in 1483 and had to be renovated after a fire in 1675. In 1734 Caspar von Schmid had the Chrysanthic chapel built in the Rococo style, presumably intended as a burial place for his family. As early as 1706 a conflagration damaged the church tower on the south side so badly that it was demolished down to two storeys and finally completely dismantled in 1772. It was replaced in 1828 by a classicist tower 42.15 metres high on the east side. Over the course of time the parish church changed its appearance. In the 1880s, the interior was designed in the neo-Gothic style. The high altar, which shows the coronation of Mary, also dates from this period. Over the course of time, however, the aesthetic sentiment changed. In 1949, during an interior renovation under Pastor Peter, the exuberance of the neo-Gothic style was reversed and today's late Gothic colour scheme was created. From 2012 to 2014, a comprehensive interior renovation was carried out in two stages. Since then, the church has been restored in fresh colours, with new pews and entrance doors as well as a new heating and lighting system. In addition, three of the five church bells were replaced by new bronze bells. With the two existing bronze bells there is now a melodious overall picture once more.
High altar: The high altar was donated in 1887 by Pastor Paul Sammereyer from Triftern on the occasion of the 35th anniversary of his First Mass in his home parish of Birnbach. The neo-Gothic altar rises in a clear tripartite division from the predella, altarpiece with main niche and side compartments and the superstructure at the top. The centre of the whole altarpiece is the"Coronation of Mary" relief. The scenery is framed by angels and God the Father. To the side of the altar relief, in two vaulted niches, on the left St. John of Nepomuk and on the right St. Francis Xavier get their dignified place. With the evangelist figures above them, the construction of the delicate truss begins, at the head of which the angel prince Michael watches over. He is accompanied by the two archangels Raphael and Gabriel, who have each found a place next to him.
Chapel of the Virgin Mary: The Chapel of the Virgin Mary, with its neo-Gothic representation of Mary with the body of Jesus Christ and Saints Leonhard and Francis of Assisi, houses the centre of the altar of Our Lady, which was originally erected here in 1891/92. Opposite is a larger-than-life baroque cross from the early 18th century. To the left and right of it commemorative plaques commemorate the fellow citizens who died in the two world wars. The neo-Gothic baptismal font stands approximately in the middle of the Chapel.
Chrysanthic Chapel: On the north side of the nave, in 1734 the court margrave Baron von Schmid had the current Chrysanthic Chapel built, presumably as a tomb for his family. A cartouche with the coat of arms of the barons of Schmid-Echingen zu Balzheim above the triumphal arch is an indication of this. This side chapel houses the relics of the catacomb saint Chrysanthus from Rome, which were transferred from the monastery of St. Salvator to Birnbach at the request of Baron von Schmid in 1695 and initially found their place in the middle of the presbytery. During the renovation in 1949, the reliquary of St. Chrysanthus was restored to the parish of Wallersdorf. The Brother Konrad statue was put in its place. On 25 October 1976, however, the relics were returned to their original location and have since been kept in a glass sarcophagus.
Pulpit: The pulpit, which is in the same style and setting as the high altar, was erected in 1888. On the four free sides it shows the four evangelical parables of the Good Shepherd, the Sermon on the Mount, the Rich Fisherman and the Sower. The background of the representation of the Sower shows the Birnbach church with the former Maria-Ward monastery. The whole work is very beautiful.
Gallery/organ: At the western end of the church is the two-storey gallery with the organ. The first floor has 100 seats and is traditionally used mainly by male churchgoers. The Eisenbarth organ from Passau has been sounding from the top gallery since 1970. The balustrades are each decorated with neo-Gothic blind tracery.
Patrocinium: 15 AugustPatrocinium: 15 August
You can find further information about the Brother Conrad Year 2018 in our corresponding brochure
http://www.bb-mediaserver.de/media_badbirnbach/broschuere_bruder_konrad.pdf

Please enter the point you wish to depart from. You can also include a street address in order to get a more precise result.